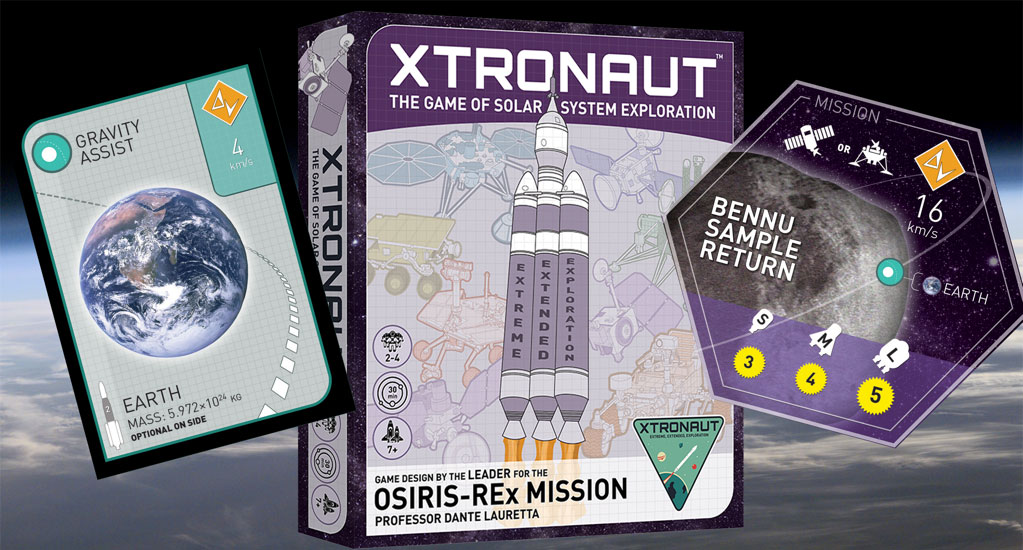 Real space science, engineering, and technology in a fun game for the entire family!

We have included a nine-page informational and hands-on workbook with the game. This workbook enhances game play and the educational experience by providing more information about planning a space mission and travelling to asteroid Bennu with the OSIRIS-REx mission. Learn about rocket components, rocket fuel, and picking the best rocket for a mission. At the end, design your own space mission!

Each player has their own board, representing an individual launch site at Vandenberg Air Force Base or Cape Canaveral Air Force Station. Boards allow players to track their accumulated Delta-V and total points, place their mission card, and collect the right combination of rocket components, spacecraft, and gravity assists to complete their mission.

Game includes 29 Mission Cards to destinations across the Solar System including the Moon, Mars, asteroids, and other exciting mission targets Mission Cards indicate which type of spacecraft is required to complete the mission, the Delta-V required, the planets that could provide a boost though Gravity Assist, and the points earned by completing the mission, which varies depending on the size of the spacecraft.

We formed Xtronaut to inspire the next generation of scientists, engineers and citizen scientists through space mission-related games and education programs. We were founded by the leader of the NASA OSIRIS-REx mission (launching September 2016, to an asteroid named Bennu), and by a leader in the space tourism sector (organizing team ford first tourist flights on the Soyuz Rocket to the ISS). Space missions, including robotic missions, are about exploration — but who are the explorers in a robotic mission — and what do we call these people? There was no term, so we coined name “Xtronaut”. We encourage interest in space exploration and all types of STEM-related studies by expanding the notion of who is an explorer in today’s world of robotic missions — to include all the people involved in exploration — scientists, engineers, educators, students, and the public as a whole — not just the few fortunate enough to climb into a rocket. This expanded idea of these explorers — Xtronauts — includes the group that designs components and instruments, develops the software, launches the rockets, operates the vehicles, performs experiments, manages the programs, conducts research, participates in the related science, or simply appreciates the beauty of the universe revealed by the probes. Kids become explorers by learning about science and technology! Play our game and become an Xtronaut! Picture: Dante, Mike, and Mike’s son Joshua at Maven Launch at the Cape.

Describe your product in 3 words.

How did you come up with the idea for this product?

Dante Lauretta led the creation of XTRONAUT by combining two of his passions in life – solar system exploration and strategy gaming. He is now a Professor at the University of Arizona and the leader of the NASA OSIRIS-REx asteroid sample return mission, launching in 2016. We wanted to make a game that captures the various challenges and fun of planning a space mission. Together with Mike Lyon, and many of our fellow rocket scientists and engineers, who are also huge board game fans, we created a game that is grounded in the real world of NASA missions. The result is an exciting game that combines real rocket science with mission planning, strategy, politics, and interactive play. We invite you to join us on this great cosmic adventure – buy the Xtronaut game and begin your journey! Picture above: Dante with OSIRIS-REx and asteroid Bennu models, Mike in Soyuz simulator with Russian commander.

What makes your product special?

No board game combines real-world space mission planning, rockets, Solar System exploration, and technology into an engaging, fun, and educational game. Xtronaut is not a science fiction or fantasy game, but incorporates years of actual space-mission planning and development experience.

What has been the best part of your startup experience?

Both Dante and Mike are space enthusiasts — and believe in the importance of the scientific information and discovery that results from space exploration. But just as important is the impact that space exploration can have on the next generation of scientists, engineers, and the interested and engaged public. We have been gratified by the positive feedback we have had from game players, educators, students, and many others for the Xtronaut game and our education programs.