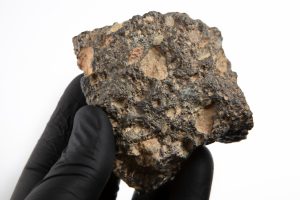 A lunar meteorite whole stone that landed in Northwest Africa

If you look at the Moon through a telescope, you will immediately notice that much of its surface is covered by craters. Some of these may be volcanic in origin, but many or most are meteorite craters and they were made when cosmic debris from elsewhere — most likely the asteroid belt — crashed into the Moon. When the composition of a lunar meteorite that has been found on Earth is analyzed in the laboratory, it is clearly seen to be a match for specimens transported to Earth by the Apollo astronauts. More remarkable than that, even, is the fact that some lunar meteorites can be paired with a particular part of our nearest neighbor, meaning we can tell not just that they came from the moon, but also which part of the Moon!

While it is illegal for private collectors to own Apollo return samples, it is entirely legal to buy lunar meteorites. These specimens have been analyzed and authenticated by leading meteorite scientists and are, without a shadow of a doubt, authentic and legitimate geological examples of our nearest celestial neighbor.

Lunar, feldspathic breccia Found in Northwest Africa, 2017 A feldspathic breccia, NWA 11237’s geochemistry includes a mineral called anorthite; in 1971, astronauts James Irwin and David Scott (Apollo 15) collected what is now known as the Genesis Rock (sample 15415) from Spur crater. Analysis concluded that the rock is make up of anorthosite, which is composed mostly of anorthite. This material is what the lunar highlands, the light colored material on the Moon’s surface, is mostly made of. These highlands are older than the darker plains on the Moon, and hence display more craters. The lunar highlands are also the site where many volcanic lava tube skylights have been found.

Lunar, feldspathic breccia Found in Northwest Africa, 2017 NWA 11303 is one the more visually appealing lunar meteorites available to collectors, and the favorite of company staff. It was found in 2017 and classified by meteorite scientists A. Irving and S. Kuehner at the Department of Earth at Space Sciences at UWS. Laboratory-polished slices reveal a kaleidoscope of clasts of varying sizes and colors, clearly demonstrating the multifaceted composition of this lunar breccia. It is expected to see little or no iron and lunar meteorites, but this amazing moon rock contains visible metallic inclusions. This extraterrestrial nickel-iron was likely brought to the Moon on board large asteroid fragments, suggesting NWA 11303 is a composite of indigenous lunar material combined with meteorite fragments that could have originated hundreds of millions of miles away. The laboratory noted the extreme hardness of this rock, which lent itself to an exceptional polish.

Lunar, feldspathic breccia Found in Mali, 2017 Acquired from the finder in 2017 in Africa, the lunar meteorite Northwest Africa (NWA) 11788 was sent to the Institute of Meteoritics at the University of New Mexico for analysis and classification. The “Meteoritical Bulletin” describes it as “a finely fragmental breccia with white feldspathic clasts set in a dark gray ground mass with metal flecks and minor vesiculation appearing throughout.” Note its dark gray, almost black matrix, punctuated by clasts of varying size and color.

Lunar, feldspathic melt breccia Found in Northwest Africa, 2021 Northwest Africa 13974, an impact melt breccia, was found in the Western Sahara and multiple complete individuals were purchased by Adam Aaronson in Temara in 2021. Cut faces reveal a dark grey interior and a brecciated texture. Lunar breccias are typically found in areas where fragments of angular rock have been fused together, and the clasts found in this spectacular lunar include anorthite, rare on Earth but found widely on the Moon and compose the Lunar terrae, patches of bright white and light grey terrains on the Moon’s surface. The terrae are the ancient remnants of the lunar crust, which have been bombarded over billions of years by impacts large and small.

Lunar (bas. breccia) Niger, 2020 Found in 2020 in Niger, NWA 14188 is a rare basaltic breccia lunar meteorite—in other words, basalt fragments that have been cemented together over time to create a breccia. Apollo astronauts collected several Moon rocks that turned out to be basalt breccia, at the bottom slope of the Apennine Bench Formation, above Spur Crater.

Lunar, gabbro Found in Northwest Africa, 2013 Lunar meteorite NWA 8277 was a small single stone weighing only 773 grams, a breccia with distinct clasts and multiple lithologies. It is noted in the meteoritical bulletin as an achondrite (lunar breccia), comparison of macroscopic and backscatter-electron textures, geochemistry of pyroxenes, olivines, and plagioclase. We are fortunate to have a few slices of this rare material available.

Lunar, feldspathic breccia Found in Gao, Mali, 2019 A recent find (December 2019), Tisserlitine is a highly desirable lunar feldspathic breccia hailing from the Kidal region of Mali. Specimens of this remarkable meteorite exhibit “knobby” exterior features and a surprising pinkish-colored interior and a smattering of clasts ranging in color from dark grey, light grey, and white. Finders of this lunar visitor recovered a massive 47,705-gram stone, including several smaller pieces. “Feldspathic” refers to feldspars, which are rock-forming minerals containing sodium, calcium, potassium or barium. Common examples are orthoclase, albite, and anorthite. Feldspar is incredibly abundant on Earth, making up over half of Earth’s crust. The petrography of Tisserlitine also contains anorthite, a light-colored material on the surface of the Moon in an area called the lunar highlands. These highlands are older than the darker plains on the Moon, and hence display more craters. In 1971, astronauts James Irwin and David Scott (Apollo 15) collected what is now known as the Genesis Rock (sample 15415) from Spur crater. Analysis concluded that the rock is make up of anorthosite, which is composed mostly of anorthite.

Lunar, feldspathic breccia Found in Adrar, Algeria in 2020 Found by meteorite hunters between Algeria and the find site of the Erg Chech 002 meteorite. Classified as a feldspathic breccia, Touat 005 is unique in that it contains white plagioclase megacrysts, or particularly large crystalline grains. A possible monomict breccia, it’s likely that Touat 005 is made up of several rocks—of similar lithologies, or physical characteristics—that brecciated on the Moon’s surface. These light-colored grains, which are set against the meteorite’s dark, shock-veined matrix, give Touat 005 its nickname, “The Stained Glass Lunar.”