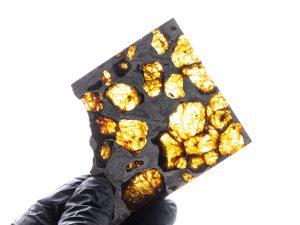 Fukang: The Reigning Queen of Pallasites

The rarest of the three main types of meteorites, the stony-irons are divided into two groups: the mesosiderites and pallasites. Mesosiderites are believed to have been formed by violent asteroidal collisions, millions of years ago in deep space.

Pallasites are no doubt captivating—they’re unlike anything found on Earth, and their story is one of massive catastrophe. Tiny droplets of metal found have been found, in rare occasions, inside of an olivine crystals. These minute blebs have recorded ancient magnetic fields presents when their parent planetesimal was producing magnetism from its molten core. Such a phenomenon must have occurred at a very low temperature, giving scientists clues as to how pallasites formed. One explanation is that two planetesimals collided, injecting the molten metal found in the core of one into the olivine mantle of the other. The metal wrapped itself around crystals of olivine, forever encasing them as the metal cooled.

Pallasites are extremely rare. As of winter 2022, out of the approximately 70,000 officially recognized meteorites, there are only 158 known pallasites.

Our catalog of stony-iron meteorites for sale is presented here, in alphabetical order. Click on any image for additional photographs. All specimens are fully guaranteed and we pride ourselves on outstanding customer service.

Pallasite-PMG, Found in Kansas, 1881 At Aerolite, we love all pallasites, but Admire is quite close to our hearts. Its name made waves when hosts Geoff Notkin and Steve Arnold pulled a hefty 223-pound “Alpha” (Admire) pallasite out of the ground on Season Two, Episode One of Meteorite Men. Not to worry — that monster remains intact and travels to museums and exhibits around the United States. These lovely part slices, crystals and “nuggets” are from the same strewnfield, but an altogether different rock. The slices were expertly prepared and are beautifully appointed. The “nuggets” are created when the pallasite is being stabilized; they truly look like visitors-from-outer space. The crystals are whole and tumbled. Imagine adding an entire pallasite crystal to your collection!

Mesosiderite-B4 Found in Southern Tagalog, Philippines, 1956 The story of the Bondoc mesosiderite is one of the most remarkable in meteorite history. Recovered by H.H. Nininger 40 miles from the nearest village in a remote part of the Philippines during the 1950s, the original, and only, mass weighed a staggering 1,955 pounds. At the time, it was the second largest stony-iron meteorite ever found. It took Nininger nearly four years to get the mass back to the United States, and its amazing journey included travel by bulldozer and river raft. Examples of this material are described as Bondoc nodules. Some of the matrix survived in excellent condition. Some of it was cut into slices, and others were preserved in their natural state. We are very pleased to have examples of both. These are described as Bondoc silicates. Since Nininger transported the original mass from the Philippines, we can say Bondoc has Nininger provenance, even though not all specimens carry a hand-painted number.

Pallasite, PMG Found in Belarus, Russia, 1810 First discovered 0.4 km nothern of the village of Ljady, Bragin district in Belarus, Brahin is among the most alluring of pallasites. Displaying rich, sea-green olivine (peridot) crystals, these outstanding laboratory prepared slices show a high olivine density (approximately 80%), with colorful crystals appearing suspended in a delicate lattice of shiny metal. Cut thin for maximum translucency, and expertly prepared in one of the world’s top labs to show off their bright nickel-iron matrix. 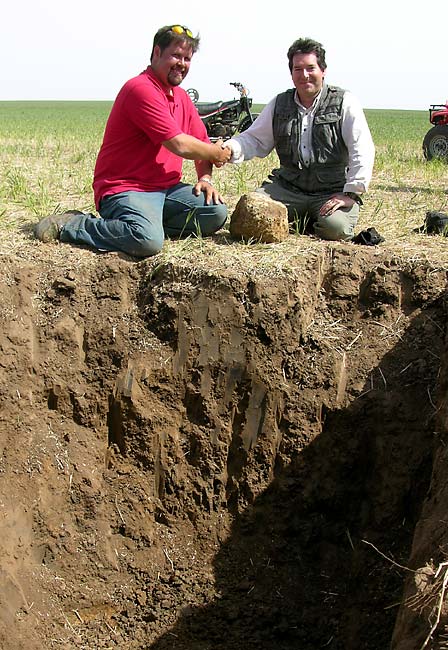 Taken from one of noted meteorite hunter Steve Arnold’s personal finds, made circa 2006, this magnificent full slice is giddily awash in coffee bean-shaped yellow and green extraterrestrial gemstones. Note the large, dark green, and ball-shaped olivine cluster, slightly off from the center. The shape of the slice — reminiscent of a letter “D” — indicates that the original whole mass was oriented, much like Arnold’s record-breaking 650-kg find. It maintained a fixed orientation towards Earth during flight, and the leading edge ablated into a gentle cone shape. So, even after cutting and preparation in the laboratory, the vestiges of this meteorite’s tumultuous flight through our atmosphere can still be seen written into its luminous shape.

Mesosiderite-A Found in Australia, 1921 If you know a thing or two about meteorites, you probably know that the ones with wacky names usually come from Australia. One such space rock, Dalgarana, was found in 1921 after the discovery of the impact crater by an Aboriginal stockman in the same year. The Dalgaranga crater is of note as its one of Australia’s smallest impact craters and the only crater known to have been formed by a rare mesosiderite. Harvey H. Nininger, considered by many to be the father of contemporary meteoritics, was the first to recognize the Dalgaranga meteorite as a mesosiderite. The crater is believed to be approximately 270,000 years old, making Dalgaranga one of Earth’s oldest meteorites. Specimens are weathered, but still adhere strongly to a good magnet.

Golden Pallasite You won’t find this meteorite listed in the Meteoritical Bulletin, but it’s an authentic pallasite found in Northwest Africa in 2021. Currently unclassified, it’s called the “Golden Pallasite” because this meteorite has a unique patina that appears to glitter like gold in the sunshine. Some Golden Pallasite pieces have been sandblasted into beautiful shapes, a term used to describe the process where windblown sand sculpts the surface of a meteorite over the course of many, many years. Golden Pallasite specimens often display large olivine crystals embedded in an iron-nickel matrix. Pallasites are extremely rare and are believed to have formed in asteroidal collisions that occurred an estimated 4.5 billion years ago when iron from an asteroid mixed with the material in the mantle of another, larger asteroid. As of 2022, out of approximately 69,000 officially recognized meteorites, there are only 154 known pallasites.

Pallasite, PMG-an Found in Australia, 1924 The Huckitta meteorite was recovered in 1937 from Huckitta Cattle Station in Australia. The history of cattle stations began in the early 1880s with Aborigines playing an important role as stockmen. In 1924, a small 1,084 gram mass, dubbed Alice Springs, was found in the area. 13 years later the main mass was recovered, weighing in at 1,411 kilos. Historically, darker pieces are thought to come from the larger, main mass and pieces containing olivine come from the smaller mass. Huckitta is considered anomalous for its elemental abundances; examining the interior of a sliced specimen will reveal as much, as it just doesn’t look quite like other pallasites; it is known for its very dark, altered olivine crystals and terrestrialized iron matrix. Classified as a pallasite, the 1,411.5 kilogram main mass is severely weathered. In fact, some pieces display such advanced stages of terrestrial weathering that the nickel-iron matrix has been transformed into iron oxides hematite and magnetite. Thousands of pounds of iron shale that had weathered off the meteorite were also collected from the find site.

Pallasite, PMG-an Found in Northwest Africa, 2014 This is a truly remarkable find from the northern deserts of Africa: an astoundingly vibrant pallasite with olivine colors ranging from tangerine all the way to lime green. There is a significantly high crystal density among the iron and they vary from small clusters to large, attention-seeking individuals. In order to best display the interior, we have various slices that are polished on one face and etched on the other. Plus, each slice is cut thin in order to boost the transparency of the olivine crystals and allow one to create a brilliant, artistic show of color when presented with light, even if the light source may be quite dim. It is an unequivocally luxurious and bold pallasite.

Pallasite Found in Eastern Kenya, 2017 Sericho pallasite is an amazing discovery. Although recorded in 2016 and officially recognized as a meteorite in 2017, local lore has it that several large Sericho masses had been known to exist for generations. Pure olivine (peridot) is naturally green, but Sericho’s sojourn on Earth has caused its crystals to terrestrialize and acquire yellow, orange, and brown hues. While pallasites are typically considered to be composed approximately 50% olivine and 50% nickel-iron, Sericho has a particularly high crystal density, with estimates putting it at 70–80% olivine.

Pallasite, PMG Found in Magadan district, USSR, 1967 Seymchan is the meteorite that kept on getting more interesting as time went on. First discovered during the summer of 1967 by the Russian geologist F. A. Mednikov, it was originally classified as a IIE iron meteorite. In the early 2000s, meteorite hunters associated with the Vernadsky Institute in Moscow returned to the site in the hope of finding additional specimens. They did. And there were amazed to discover not iron meteorites, but pallasites — stony-iron meteorites encrusted with olivine crystals. Their finds resulted in a rare classification change in the scientific literature: in 2007 van Niekerk et al. revised the designation for Seymchan from iron to pallasite. Seymchan has an unusual structure: some areas display olivine-rich clusters, while others consist almost entirely of nickel-iron. During its tumultuous flight through the atmosphere and subsequent impact, it is easy to imagine the meteoritic masses of Seymchan shearing at the nickel-iron/olivine borders. Some pieces, therefore, appear to be entirely metallic, while others appear pallasitic. This explains why Mednikov found what he assumed to be an entirely iron, or sideritic meteorite, while later expeditions found what they assumed to be pallasites.

Mesosiderite, A-1 Found in Chile, 1861 Stony-irons are by far the rarest of the three main classes of meteorites; the others being irons and stones. Mesosiderites and pallasites make up the stony-irons and Vaca Muerta (Spanish for “dead cow”) is a rare example of the mesosiderite type. First discovered in 1861 by prospectors looking for rare metals, the Vaca Muerta meteorite comes from a difficult-to-reach area in Chile’s vast Atacama Desert. The area has been extensively hunted since the 1960s and examples of this meteorite only rarely come to market.