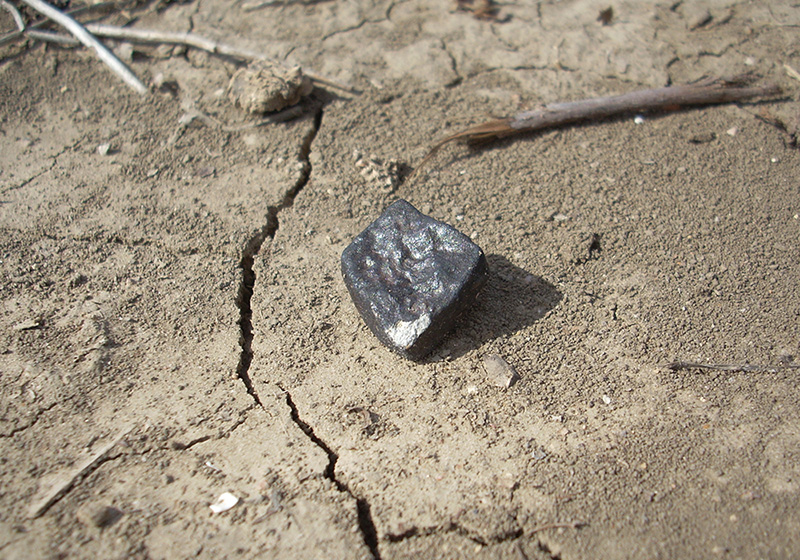 Ever since we humans evolved eyes through which to see, a mind with which to ponder, and a night sky to stare up at in wonder, we have been fascinated, mystified, and inspired by the shooting stars that hurtle, sparkling and brilliantly short-lived, through the darkness above us. And we have done our best to describe them in word, song, and images.

There are twenty references to shooting stars — known as meteors in science — in the collected works of William Shakespeare, alone. The novelist Vladimir Nabokov imagined that meteors were celestial trails formed when naughty angels disposed of cigarette butts, lest they be caught smoking by Gabriel. A typically self-assured Jim Morrison compared himself to a shooting star, and in the beloved fantasy novel Stardust — later adapted into a delightful feature film starring Claire Danes — my lifelong friend, Neil Gaiman, speculated that if a half-Faerie man followed a shooting star to its landing place, he would there discover a beautiful (and quite headstrong) young, blonde woman.

In my career I have, many times, followed the trail of a dazzling meteor or fireball, and many times found the extraterrestrial culprit responsible, dashed on the plains or deserts of our planet Earth. Alas, none were quite as luminous as the versatile actress Ms. Danes, but they were beautiful and alluring in their own right … and valuable too.

WHAT ARE SHOOTING STARS AND WHAT REALLY HAPPENS WHEN YOU FIND ONE?

Even though the words are similar, it is important to understand that meteors and meteorites are as different as could be. A meteor, or shooting star, is the bright streak of light we see in the night sky. It is caused when a piece of cosmic debris (usually an asteroid fragment) vaporizes as it is super-heated in Earth’s atmosphere, due primarily to rapidly increasing air pressure. The word meteor describes the atmospheric phenomenon — the actual streak of light — rather than the rapidly traveling fragment that is creating that streak of light. If any part of that fragment makes it all the way through our atmosphere without burning up completely, and lands here on Earth’s surface as a solid mass, it becomes known as a meteorite. So … all meteorites were once (briefly) meteors, but not all meteors become meteorites. Since a meteor is an atmospheric phenomenon that occurs many miles above Earth’s surface, you’d never be able to actually find one. But you can find meteorites if you know where — and how — to look, and are very lucky, skilled, or determined.

When we do find a meteorite that is new to science, there is a rush to get a representative sample to an accredited laboratory as soon as possible. Exposure to rain and our atmosphere will soon alter, or terrestrialize, meteorites, making them less useful for scientific analysis. Later, additional samples may be donated for research, exhibited in museums, or sold to private collectors to help underwrite the high cost of expeditions and field work.

Meteorites, therefore, are pieces of solid cosmic material — iron, or stone, or a mixture of both — that fall to Earth. The are divided into three main groups and many sub-groups.

Chondrites, the largest group of stone meteorites, are the most abundant type and account for about 80% of all known meteorite falls. They are composed of approximately 20% nickel-iron, mixed with common minerals that we also find on Earth such as feldspar, plagioclase, and olivine. Iron meteorites are quite rare and account for less than 5% of falls, while falls of the intriguing stony-irons make up only about 1%.

When a potential meteorite slams into our Earth’s moist, oxygen-rich atmosphere, its exterior temperature is raised by thousands of degrees F  — a powerful and shocking effect that will toast its surface almost instantaneously. As a result, a meteorite that is found soon after it lands will show a dark, burned, and blackened surface that is often likened to a charcoal briquette. Since nearly all meteorites contain 20 to 93% iron, it will feel heavy for its size and will usually attract strongly to a powerful magnet.

Meteorites often display fascinating surface features and unusual internal structures, all of which can be markedly different from what we are used to seeing in Earth rocks. They have great research value to scientists (a meteorite scientist is known as a meteoriticist, not to be confused with a meteorologist who studies the weather) and can also have significant financial value to private collectors and museums.

I have travelled over half a million miles across and around our planet Earth in search of meteorites. I have found thousands of them, ranging in size from smaller than a grain of rice, to a monster weighing 273 pounds (124 kg) that was buried nearly 6 feet (2 meters) underground. Hunting for meteorites, and recovering and studying them, and sharing what I have learned with millions of people through my Discovery Networks television series, Meteorite Men, my writing, photography, and lectures, have been the great adventure of my life. In this blog — Searching The Skies — I will share that adventure with you. I invite you to come along with me on an amazing journey and learn everything I know about meteorites — rare, mysterious, and fascinating visitors from space.

WANT TO KNOW MORE ABOUT METEORITES?

HOW TO FIND METEORITES: Preparing For A Meteorite Hunting Expedition →