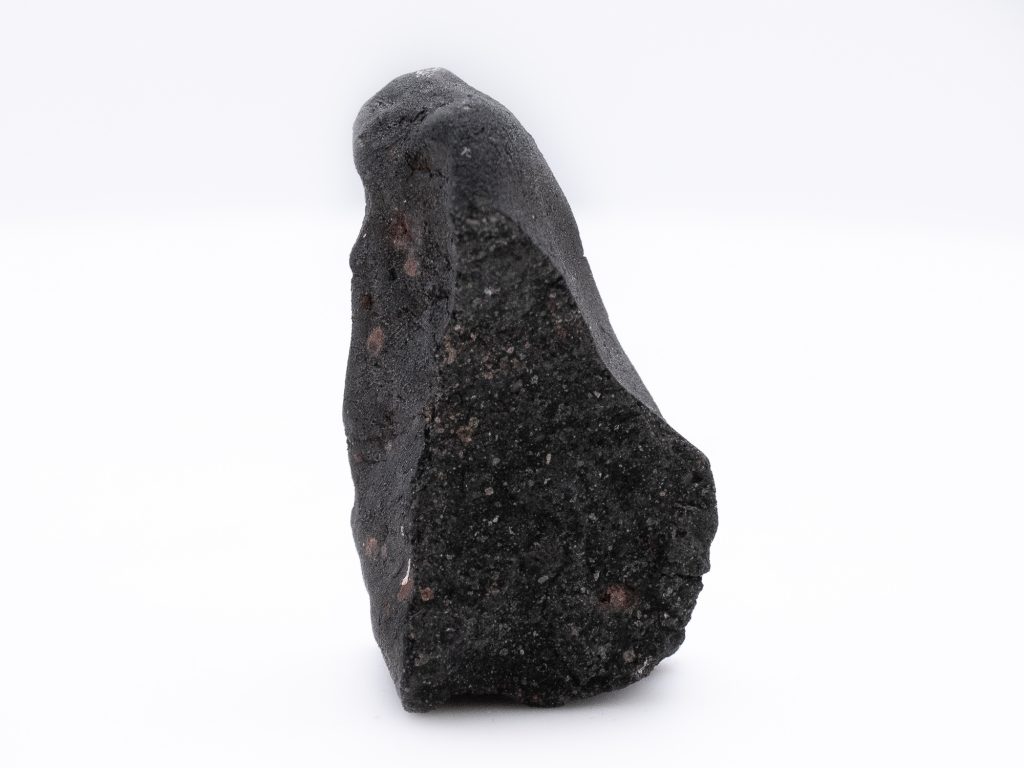 A recent meteorite fall, dubbed the “Rainbow meteorite” by some, made headlines in April of 2019 when a fireball was spotted in Costa Rica. The meteorite, later named Aguas Zarcas, was a trifecta of rare meteorite characteristics; not only was it a witnessed fall, but a few, precious stones were “hammer stones” that crashed through a house; it was classified as a rare CM2 that rocked the scientific community with new data that could better inform their concept of how planets form and how carbon-based life arrived on Earth; and finally, the hammer stones—some which even had paint on them from the roof panel they hit—and impact artifacts were collected and preserved.

To clarify, meteorite “falls” are rare events where a meteor’s fall to Earth from outer space was witnessed by one or more credible observers. Rarer still are those instances where the meteorite actually strikes a man-made object; the meteorite community refers to these specimens as “hammer stones” and the objects they struck as “impact artifacts” or “hammer artifacts.”

Recent publications compare the “inky” Aguas Zarcas stones to “legendary carbonaceous chondrite” Murchison, a widely studied meteorite found in 1969 in Australia. Academics believe Aguas Zarcas holds similar promise to Murchison and are excited by the freshness of the pieces, which allows researchers to hunt for amino acids, proteins, and other molecules that hold clues to understanding the cosmos and our place in it. Philipp Heck, curator of the Chicago Field Museum meteorite collection, is quoted as saying “If I had to start a new museum collection for meteorites, and I could only select two, I would choose Murchison and Aguas Zarcas…If I could choose only one, I would choose Aguas Zarcas.”

Meteorites have fascinated humans since ancient times; they wove tales of these mysterious space rocks into their folklore, culture, and traditions. One of the most famous examples of this are civilizations whose worship incorporated rocks that fell from the heavens, like the “Black Stone of the Kaaba,” also called the “Kaaba Stone,” venerated by early Muslims in pre-Islamic times. This stone, believed for centuries to be a meteorite, has become deeply entrenched in Islamic tradition.

We also find meteorite-like objects described in stories from the ancient Egyptians, Greeks, and Romans, whose imagination was captivated by the thought of contact from the heavens in the form of strange rocks. In modern times, the phenomenon of a fireball is widely reported on by the international press. The most well-remembered and documented witnessed meteorite fall, for example, is Chelyabinsk: a large stone which fell in Russia in 2013. The world was shocked by dash-cam footage of a massive fireball streaking across the morning sky, bursting intermittently in bright, white flashes as it fell.

Only some of the Chelyabinsk stones were hammer stones, and they, along with the objects they hit, were acquired by museums and collectors at a premium. These special items represent brief flashes in time where objects from outer space collided with our everyday objects: mailboxes, windows, and sometimes, even cars and roof panels. The famed Peekskill 1980 Chevrolet Malibu impact artifact was sold into a private collection and has been displayed at museums around the world, and the original title and a broken tail light bulb sold for thousands of dollars at auction. Hammer stone meteorites themselves, like especially note-worthy pieces like Aguas Zarcas, are worth several times their weight in gold.

← HOW TO FIND METEORITES: Preparing For A Meteorite Hunting Expedition
SLS, Rockets, and Meteorites →