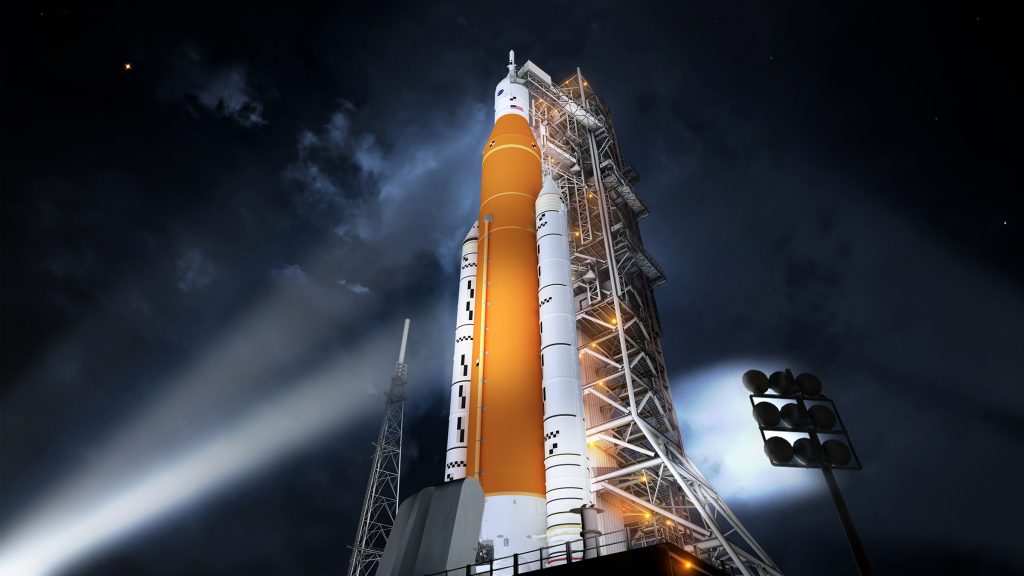 BACK TO THE MOON

A static test launch in preparation for the Moon…and beyond

It’s been nearly 50 years since the last time a human being visited the Moon; on December 1972, NASA astronauts on the Apollo 17 mission conducted geological surveys and sampling of the Moon’s surface features and materials. The crew also performed experiments both in-flight and during EVAs (Extravehicular Activity). Despite the mission’s success, the remaining Apollo missions were cancelled due to budgetary constraints and NASA’s shift of focus to other missions and spacecraft. The Moon has remained untouched by humans since then, but it won’t be for long. Rest assured, “We are going to the Moon,” in the confident words of NASA administrator Jim Bridenstine.

Following the Space Shuttle program, NASA’s Space Launch System (SLS) has been in development since 2011; its purpose is to provide a vehicle for NASA’s deep space exploration missions, which include flights to the Moon and Mars. Eventually, as humans develop plans for the exploration and development of space, SLS will evolve to fulfill the growing need for more powerful and capable configurations. Currently, SLS has has three variants—Block 1, Block 1B, and Block 2—that can be used in several configurations to accommodate the rocket’s payload and the thrust required for the mission.

NASA’s announcement of a static fire test, scheduled for Wednesday, September 2, is welcome news amid serious delays and setbacks that have plagued the development of the rocket platform. The test will take place at Northrop Grumman’s facilities in Utah, United States and “will help teams evaluate potential new materials, processes, and improvements for the boosters that will power deep space missions beyond Artemis III,” according to NASA. Artemis III will be the third flight of NASA’s Orion spacecraft launched on SLS and will be their first crewed lunar landing since 1972 and—perhaps even more importantly—the first mission where a woman will set foot on the Moon.

The Artemis III crew will be testing lunar water ice, a follow-up to experiments conducted during the Apollo 17 mission, where astronauts collected nearly 260 pounds of samples of lunar surface material. These “Moon rocks,” as they’re called, are not to be confused with lunar meteorites, which arrive on Earth after being catapulted into space from the Moon’s surface by some sort of collision. As many meteorite collectors know, it’s very illegal to own or sell Apollo return samples, though it’s thanks to these “Moon rocks” that we can positively identify lunar meteorites found on Earth. Not only that, but petrological analyses of the Apollo return samples and positively identified lunar meteorites can give us an idea of where on the Moon these meteorites may have originated.

The Apollo missions and upcoming Orion missions illustrate how meteorites impact academia and scientific research; studies of oriented meteorites aerodynamics even reveal how similar these rocks’ nosecones are to those we see on aircraft and rockets, like SLS. With the rapid advances the scientific community is making in technology, we can expect to learn a lot more about meteorites, asteroids, and our place in our universe.