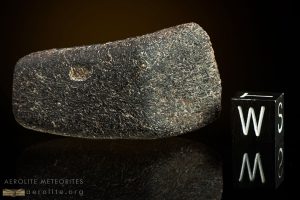 We know that pieces of the Red Planet fell here because of the robot Viking spacecraft that landed on Mars in 1976. Six years after those landings, Drs. Johnson and Bogard were studying an unusual meteorite here on Earth, with a most unusual name — Elephant Moraine 79001, found in Antarctica in 1979. The two scientists made an astonishing discovery: tiny amounts of gas trapped within vugs in the 79001 meteorite were a close match to the thin atmosphere of Mars, as recorded by the Viking landers. The experiment was later repeated and confirmed by looking at several other Martian meteorites, clearly indicating their origin point. And what a fiery and furious life they’ve had! Blasted off the surface of their home planet by other meteorite impacts (the impactors likely being large asteroid fragments), they wandered in space until falling here.

The improbable origin story of Martian meteorites makes them plenty rare — what are the chances that something would be blasted off a smaller planet that is, on average, 140 million miles away and then land on ours? Couple that with the fact that Martian meteorites are fragile; they are essentially cooled lava from another planet and contain little or no metal, meaning that — unlike most meteorites — metal detectors and magnets cannot be used to recover them, making them notoriously difficult to identify and recover in the field. Aerolite has a variety of meteorites from Mars for sale.

In this exclusive and informative YouTube educational short below, planetary scientist Dr. Tanya Harrison talks about her work, martian meteorites, and some of the wonders of the mysterious Red Planet.

Martian, shergottite Found in Morocco, 2015 A Martian impact melt is most likely the result of a giant meteorite crashing into Mars and melting Martian target rock into a new form. That in itself is remarkable. As any type of impact melt — even in the abundant chondrite family — is highly unusual. So, here we have an exceptionally rare Martian impact melt that also displays vugs. The word vug is a geological term that describes a cavity found within a rock matrix. In terrestrial formations, vugs are a prime environment for the formation of crystals of varying types. Vugs are almost never seen in meteorites. The first known Martian meteorites were identified by the small pockets of Martian atmosphere they contained. It is likely, or possible, that the comparatively large vugs in NWA 11288 once held within them the thin and alien atmosphere of Mars! The total known find weight of this rare meteorite is 407 grams. We have very few slices available.

Martian, shergottite Found in Ouarzazate, Morocco, July 2018 Little has been documented about the origin of Northwest Africa 12269; it was purchased in Morocco in 2018 and classified at the University of Washington, where scientists recommended the classification of Martian (shergottite). Shergottites are igneous rocks, meaning they likely formed when magma or lava on Mars cooled and solidified. A recently-published document appearing in the 51st Lunar and Planetary Science Conference revealed that “unpaired” Martian meteorite finds continue to increase year to year, largely due to finds coming out of Northwest Africa. “Paired” meteorite groups refer to those cases in which overwhelming evidence is present suggesting that the meteorites are part of a single fall. In the case of NWA 12269, researchers believe that it, along with NWA’s 12564, 12690, 12262, and 12335, may constitute a larger single find from an unknown site.

Martian, shergottite Found in Morocco, 2019 Northwest Africa 13227 was examined and classified by Dr. Anthony Irving of the Department of Earth and Space Sciences at the University of Washington, Seattle and it has been recognized as an authentic piece of Mars by academia. Its official details were published in the Meteoritical Bulletin in 2020.

Martian, shergottite Found in Southern Morocco, 2011 NWA 6963 is a shergottite Martian meteorite that was first discovered near the river Oued Touflit in Morocco during the autumn of 2011. The shergottite group takes its name from Shergotty — a Mars meteorite that was seen to fall in Bihar, India in the year 1865. After the initial NWA 6963 find, meteorite hunters thoroughly searched the area and additional pieces were found, some of which display a shiny, dark fusion crust. The presence of crust, together with its minimal weathering, suggest that NWA 6963 may be a fairly recent fall. Classification was carried out at the Institute of Meteoritics at UNM Albuquerque and examination of a thin section showed the primary composition to be pyroxene (a mineral commonly found in volcanic rocks) and the glassy mineral maskelynite that is formed by shock melting in meteorites and related impacts. We know that NWA 6963 originated on Mars because of the pioneering work of Drs. Johnson and Bogard on a meteorite that was found in Antarctica in 1979. The two scientists discovered that tiny amounts of gas trapped within the Antarctic meteorite were a close match to the thin atmosphere of Mars, as recorded by the Viking robot landers during the 1970s. This experiment was later confirmed by additional studies of several other Martian meteorites showing, without a doubt, that NWA 6963 and others like it, journeyed here to Earth from the Red Planet.