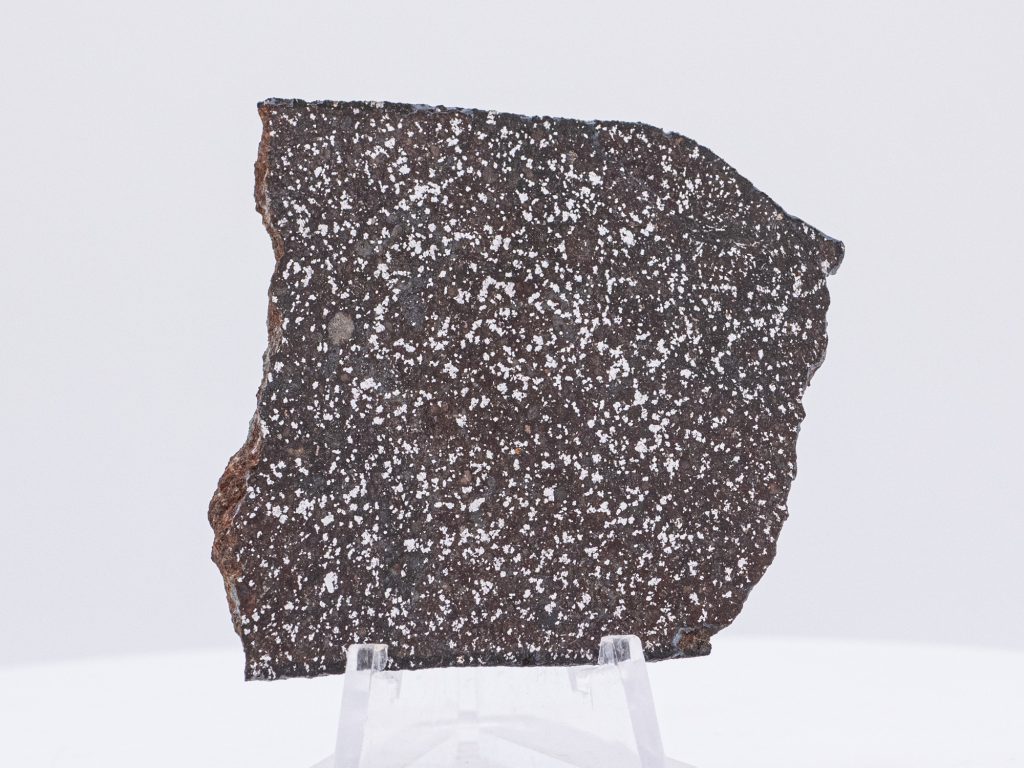 NASA’s announcement and what it means for meteorite studies

The National Aeronautics and Space Administration (NASA) made an enthralling announcement on Monday, October 26 sure to captivate the imaginations of scientists and space enthusiasts alike. The Stratospheric Observatory for Infrared Astronomy, commonly known as SOFIA, “…confirmed, for the first time, water on the sunlit surface of the Moon.” This is a major scientific discovery, as it implies that we might find water everywhere on the Moon and not just in cold, shadowy regions.

The area SOFIA detected water in is called the Clavius Crater, one of the largest lunar craters we can see from Earth and namesake of the fictional lunar administrative facility, Clavius Base, in the film 2001: A Space Odyssey. Researchers are working on theories to explain how water got there and ways humans can use it in future space exploration missions. Some scientists posit that micrometeorites, tiny meteorites measuring less than a millimeter in size, may have deposited water molecules on the lunar surface. Others believe a process involving solar wind and a chemical reaction with the minerals on the Moon’s surface may have created hydroxyl groups – entities that contain an oxygen atom bonded to a hydrogen atom – which was then converted to water by radiation.

What can scientists do with this information? Well, water is essential to life as we know it and its presence outside Earth is key to uncovering whether extraterrestrial life exists and if it does, how it came to be. Scientists have been able to confirm that some planetary bodies, like asteroid Vesta, contain water. The presence of water on Vesta and other planets/asteroids are a clue for scientists trying to determine where water on Earth originated. Finding water sources on the Moon and Mars will be an instrumental aspect of future deep space exploration missions, as water can be converted into fuel and would dramatically decrease launch costs.

Explaining how water came to be in the solar system not only impacts our future, it tells us about how it was formed, how organic life came to be, and gives us an idea of what Earth was like in its infancy. For example, a study published in Science Advances in 2018 stated that liquid water and organic compounds were found in salt crystals from two meteorites, Zag and Monahans. Meteorites that contain salt crystals are imperative to planetary research because the compounds trapped in them shed light on the origins of organic life in space. These compounds also tell a story about where in the solar system these meteorites came from. Zag, for example, is suspected to have originated from Ceres, a dwarf planet, and the asteroid Hebe.

The salt crystals found in Zag are called halites, and can only be seen using highly specialized equipment and techniques in a controlled laboratory environment. However, their presence underscores the importance of meteorite studies in planetary science. Collectors looking for something that contributed to our understanding of the cosmos would be thrilled to own a piece of Zag. As technology becomes more sophisticated and investigative techniques improve, we can expect the scientific community to continue to dazzle us with what they uncover about the world around us, where we’re going, and where we came from.