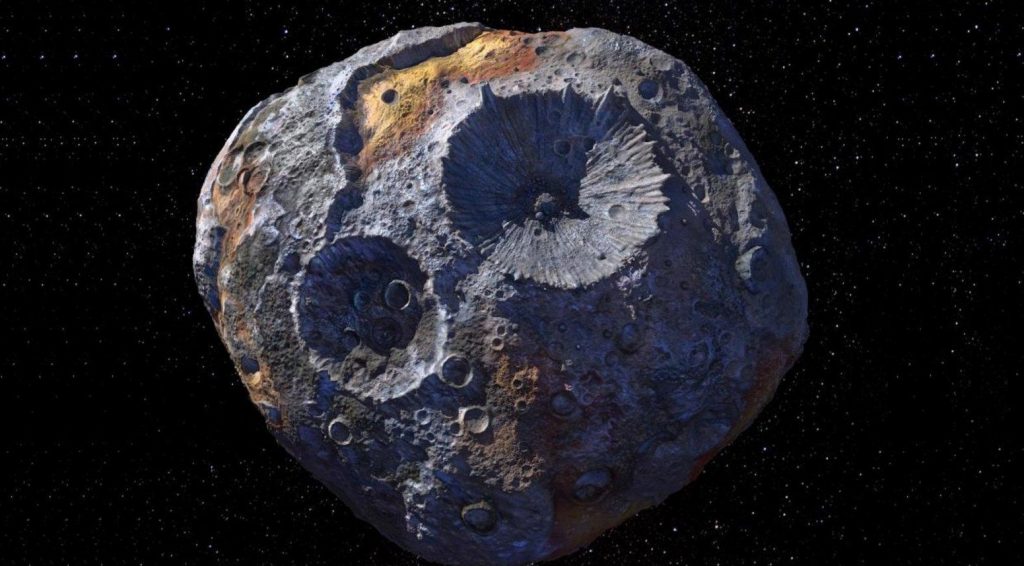 ASTEROID 16 PSYCHE
The value of asteroid research and iron meteorites

Asteroid 16 Psyche has made headlines after a report in Extreme Tech estimated its value at shocking $10,000 quadrillion dollars. Psyche is a large asteroid named after the Greek mythological figure and is thought to be the exposed core of a “protoplanet,” material that hypothetically would have eventually formed a planet. NASA’s Psyche mission will visit the asteroid in 2026 and will spend over 21 months in orbit to map and study Psyche’s properties and composition. This mission will confirm, among other things, whether the asteroid is actually the core of a planet-sized object.

Asteroids, by definition, are objects orbiting around the Sun that do not have a tail of gas or dust, at which point they’d be called a comet. Asteroids range in size; the largest was Ceres, which earned the designation of “dwarf planet” in 2006. Ceres, named after the Roman goddess, was first observed in 1801 by Giuseppe Piazzi. When another astronomer, Heinrich Olbers, discovered Pallas, the second-largest asteroid in the asteroid belt, it was decided that these objects needed to be placed in their own categories. The term “asteroid” is derived from Greek and means “star-like” and “star-shaped,” since scientists at the time found them indistinguishable from stars aside from their rapid movement.

Asteroids are significant to our research for the exploration and settlement of space for several reasons, one of them being that some asteroids pose a potential threat to Earth. These are monitored and tracked by space agencies worldwide, and scientists are working to develop asteroid impact avoidance strategies.

Asteroid mining is also a major topic of discussion and refers to the extraction of raw material for use on Earth and in space. Asteroids like Psyche, which are composed almost entirely of nickel and iron, could be very valuable far into the future. However, most conversations about asteroid mining focus on those closer to Earth known to contain water or water ice, which can be converted to fuel or used by human colonies in space.


What Asteroid Psyche Can Teach us

Studying an asteroid like Psyche can also tell us about the core of our own planet, which we can’t easily study. Iron meteorites are also valuable for this reason; it’s believed that most iron meteorites originated in the cores of large asteroids. They are almost entirely made up of nickel-iron, the primary component of Earth’s core.

Most iron meteorites display Widmanstätten patterns, which are crystalline alloy structures that are the result of liquid metal that has cooled over a long period of time. Gibeon, an iron that fell in Namibia, is a meteorite that exhibits an outstanding Widmanstätten, which makes them very desirable. Iron meteorites display other features, like flowlines, thumbprints, and orientation. Sikhote-Alin, the famous meteorite that fell in Russia in 1947, is characterized by regmaglypts caused by ablation as the meteorite hurtled through Earth’s atmosphere.

Asteroids have fascinated scientists for decades. There’s no limit to what we can do with the information analysts will uncover in the future. As we look forward to NASA’s Psyche mission, we can look to iron meteorites here on Earth to continue to develop hypotheses about what we might discover about the asteroids in the solar system.