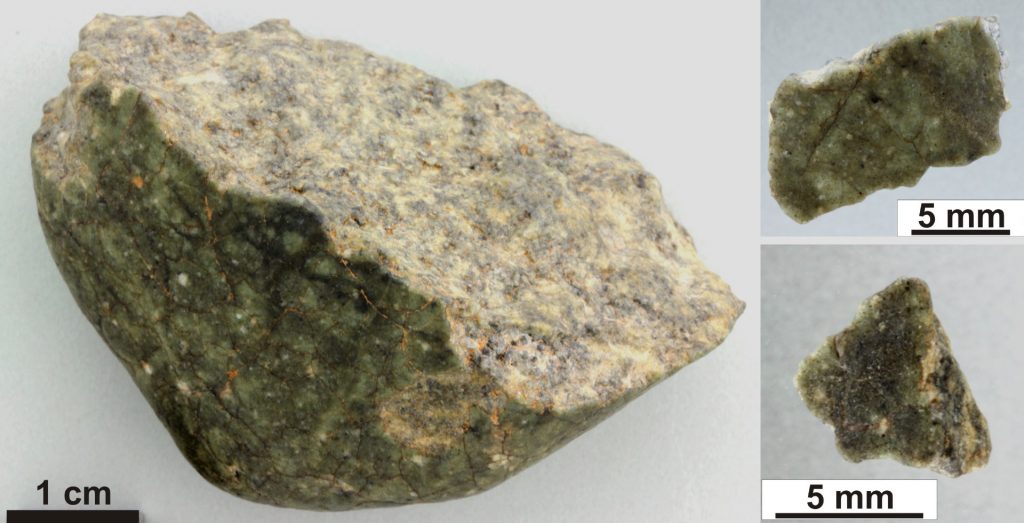 Earlier this week, news broke of a new mineral called donwilhelmsite that was discovered inside a lunar meteorite. The researchers that made this discovery, a team from Europe, believe this new information will help us better understand what happens when geological material is exposed to the extreme pressures of Earth’s mantle.

The lunar meteorite containing this strange new mineral is Oued Awlitis 001, a lunar meteorite found in Western Sahara by a group of meteorite hunters who stopped by the side of the road to cook dinner following an unsuccessful trip to Morocco. The first piece was found by a gentleman searching for firewood; an additional 50.5-gram piece, which fit perfectly onto the main stone, was later found.

Oued Awlitis is classified as a lunar anorthositic melt rock; anorthosite is an igneous rock – molten lava or magma that has solidified – composed mostly of plagioclase feldspar. Anorthositic rocks are widely studied because geologists still don’t fully understand how they form. Lunar anorthosites come from the light-colored areas of the Moon and are some of the Moon’s oldest rocks. Scientists believe these rocks were created when feldspar, a rock-forming mineral, floated to the top of a magma ocean that surrounded the Moon at its beginning.

Research on lunar meteorites tries to explain how and when the Moon formed and what it’s made of. We actually know very little about how the Solar System formed, though the theory that the planets formed from a Solar Nebula is well-established and widely accepted. Meteorites are a key to unlocking details about how exactly these events transpired; samples collected from the Moon by the Apollo and Luna missions were the first steps towards unlocking these mysteries.

Donwilhelmsite, the new mineral just discovered, is named after Don Edward Wilhelms, a geologist who contributed to the study and mapping of the Moon and helped train Apollo astronauts in geology. He and astronaut Harrison Schmidt – the only geologist sent to the Moon – were employees of the United States Geological Survey.

Meteorites, from the Moon or elsewhere, can contain amino acids, minerals – like donwilhelmsite – and even water. Water, scientists agree, is essential to life as we know it and some meteorites have been found to contain water molecules. A recent study on the ultra-rare Martian meteorite NWA 7034 – commonly known as “Black Beauty” – has found that it contains microscopic water-bearing minerals.

These new findings are incredibly valuable to the understanding of how Mars was formed and what happened immediately after its formation. Further research on donwilhelmsite and meteorites promises to reveal more information about our own planet; the materials found in meteorites are similar to those found on Earth and can tell us more about regions we can’t easily study.