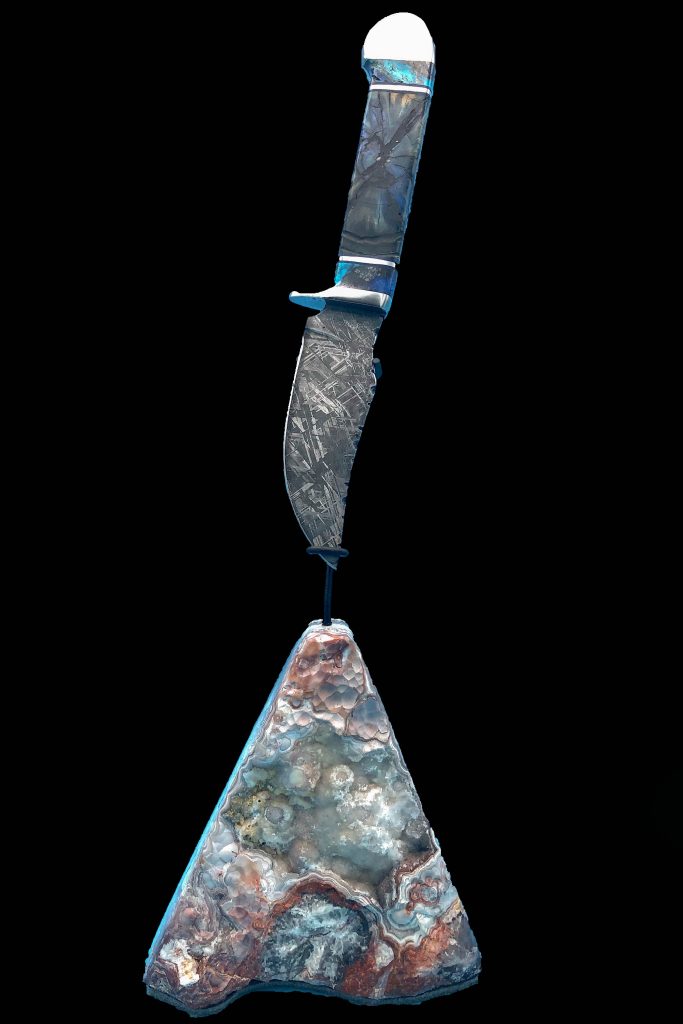 METEORITES IN ART AND ANCIENT HISTORY

Iron meteorites are some of the most recognizable space rocks. They stand out because of their size and surface features, but also because they look closest to what one might expect a rock from outer space would look like. Imagine the journey an iron meteorite takes to get to Earth’s surface, originating in the molten cores of ancient asteroids that once orbited the sun between Mars and Jupiter. These asteroids would eventually collide with other asteroids or planetary bodies and were torn apart, their pieces flung far and wide across the solar system.

Some of those pieces ended up in our atmosphere; they were superheated to thousands of degrees Fahrenheit at speeds of up to 100,000 miles per hour, melting to form the beautiful, sculptural indentations we call regmaglypts. Inside, these meteorites form fantastic geometric structures called Widmanstätten Patterns, from cooling very gradually over millions of years.

These dazzling rocks have been falling to Earth for millions of years. In ancient times, early humans worshipped these strange rocks that fell from the sky as divine beings or gifts from the heavens. There are recorded events throughout the ancient history of stones falling from the sky. Ancient Greeks even had a term for it; diopetes, meaning “falling from heaven.”

In addition, ancient peoples also used iron from meteorites – meteoritic iron – to craft tools and weapons. Not only is this fact supported by analysis of ancient artifacts, but the name for “iron” in ancient languages is evidence of their celestial origin. For example, the Sumerian name for iron was “an-bar,” which meant “fire from heaven.” Similarly, its Egyptian name was bia-en-pet, which loosely translated means “thunderbolt from heaven.”

Precious metals from heaven also include gold and silver, famously used in ancient times as currency and for worship. Gold is believed to be a product of supernova nucleosynthesis, which occurs when supernovas explode. How, then, did gold arrive on Earth? According to one theory, the majority of gold that was present in Earth’s infancy sank into its core and the gold found on its surface arrived there by asteroid impacts. For example, the asteroid that created the famed Vredefort crater is thought to have resulted in one of the richest gold deposits on Earth.

Similar to gold and silver, meteoritic iron has been used to forge not only weapons but also pieces of art. For example, a Buddhist sculpture dubbed the “iron man” that came out of Tibet was likely created from the Chinga meteorite, which was found in Russia. Other examples of art created from meteorites in the ancient world include a bead found in Egypt, a pendant found in Syria, and perhaps most famously various items, including a bracelet and headrest, found in the tomb of Tutankhamun.

While most iron meteorites today are used for academic study on planetary science, on display in museums, or sold into private collections, a few special meteorites are made into art by talented craftspeople. Few possess the skill and knowledge needed to manipulate meteorite iron without compromising the features that make them recognizable and unique.

For example, the knives in our Ice Age Series are crafted from the Muonionalusta meteorite – scientists believe this meteorite pre-dates at least one ice age – which is known for its exquisite Widmanstätten pattern. The blades of these knives have been fashioned from this meteorite as to proudly display this pattern, of which no two are alike. 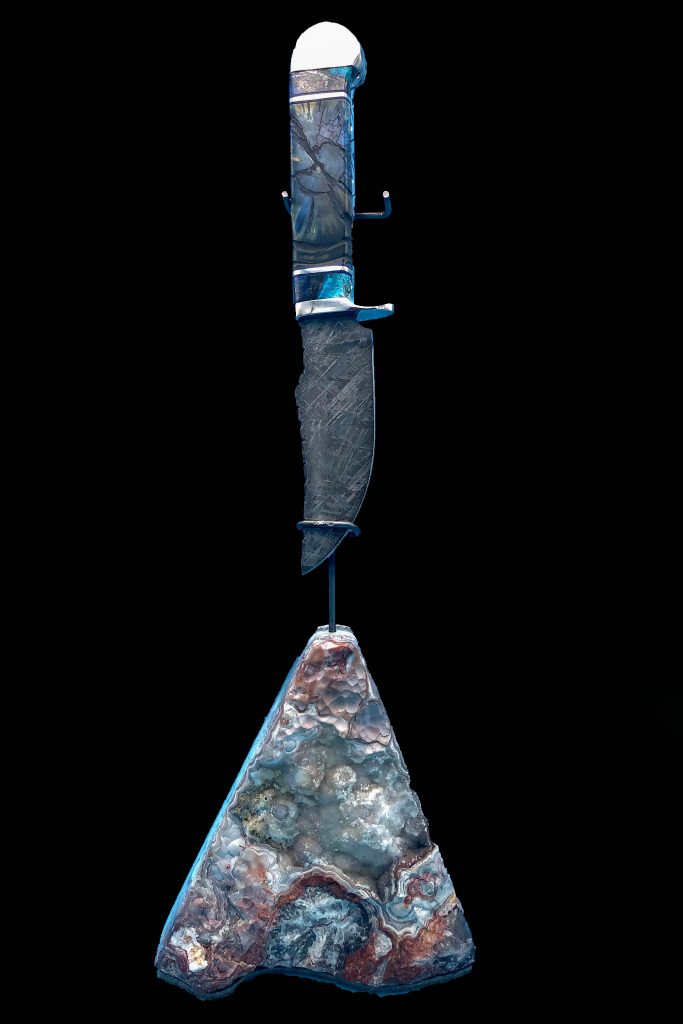 View the rest of the knives in the Ice-Age Series here.  These knives are handmade in the United States have been crafted with painstaking care. These knives also feature other rare and ancient materials, like dinosaur gembone, mammoth tusk, and shattuckite. These works of art are truly echoes of Earth’s primordial past.

← Rumuruti Meteorites: Chondrites That Are Anything But Ordinary
Where to Buy Mars Meteorite Dust →