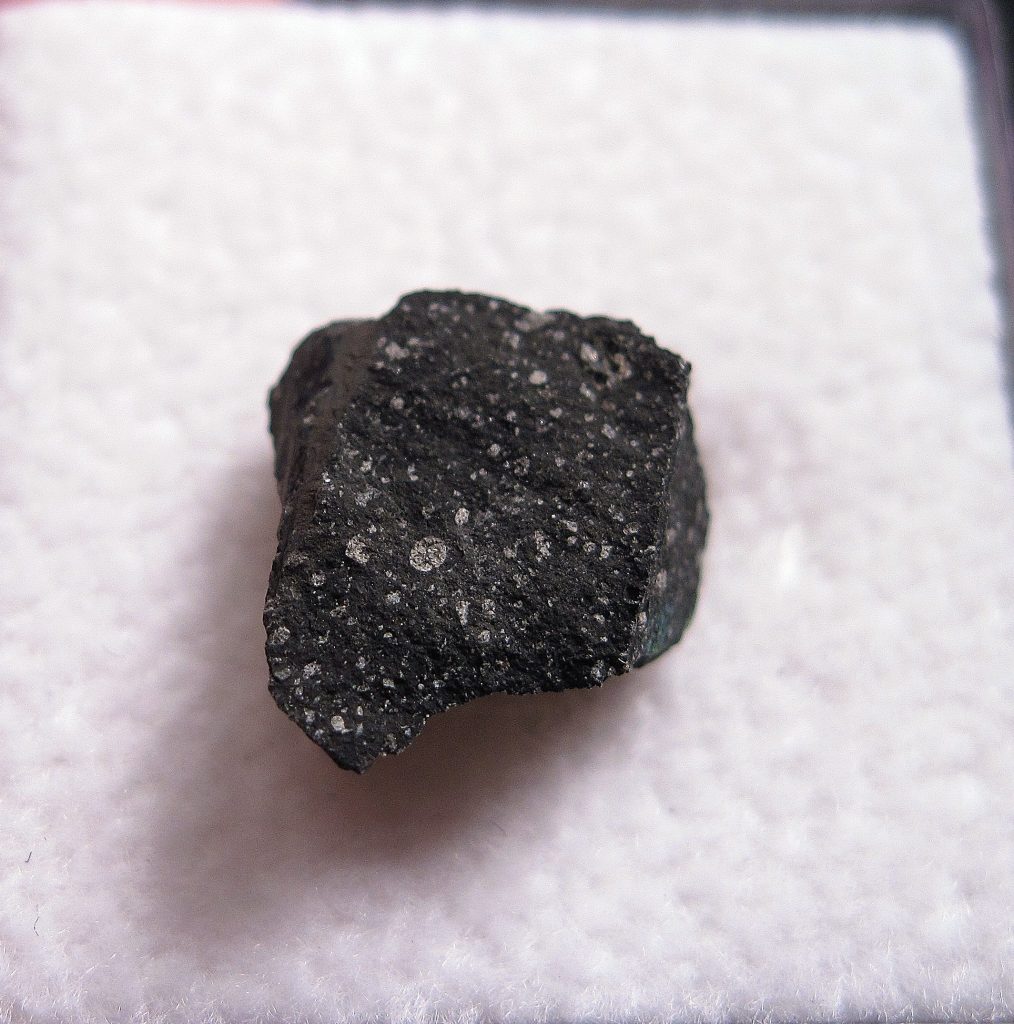 Meteorite collectors and dealers are often asked whether they have Aguas Zarcas for sale, or even if they have Murchison for sale. Few meteorites inspire as much intrigue as these two. Murchison is a stone meteorite that fell on September 28, 1969 in Australia. The fireball was seen streaking through the sky before breaking up into three pieces. The impact produced a cloud of smoke that was witnessed by locals for miles, as well as a strong tremor. Several meteorite specimens were found on the road, while the largest piece, weighing 680 grams, crashed through a roof into some hay.

Murchison is classified as a CM2; a carbonaceous chondrite of the Mighei group, which are distinguished by small chondrules and an abundance of hydrated minerals, or minerals that include water or hydroxyl. Murchison resembles Aguas Zarcas,  which contains amino acids. Both meteorites are in incredibly high demand due to the scarcity of the material available and their scientific value.

Murchison: One of the Most Studied of All Meteorites

In January of 2020, scientists found that the material found in Murchison is potentially 7 billion years old, which would make it the oldest material on Earth. Famously difficult to acquire, this stone meteorite contains common amino acids like glycine, alanine, and glutamic acid.

Aguas Zarcas, meaning “clear and pure water” in Spanish, fell on April 23, 2019 in Costa Rica. The fireball that produced the meteorite was witnessed by many locals and was captured on cameras belonging to the National Seismological Network. Aguas Zarcas is a carbonaceous chondrite and being heavily studied by scientists. Understanding the composition of these meteorites is key for answering questions about the kinds of material that were present at the dawn of the solar system.

Though similar, Aguas Zarcas differs from Murchison in that it’s a fresher fall, meaning that scientists are able to use more precise and modern techniques to analyze the compounds found in the stone. Furthermore, it’s the largest CM-type meteorite recovered after Murchison. This gives scientists a “second chance” to study a Murchison-like meteorite and one that has its own unique points of intrigue. In addition, the fall is so fresh it’s relatively free from terrestrial contamination.

Where to Find Aguas Zarcas and Murchison?

Several pieces of the Aguas Zarcas meteorite were donated to Arizona State University for study, where Dr. Laurence Garvie led its classification. ASU now holds and curates the type specimen material in a special nitrogen cabinet. Pieces of Murchison and Aguas Zarcas are on display worldwide. Aguas Zarcas is for sale on our website to the public. Notoriously difficult to find, Murchison is seldom offered on the market; however, we have a few crumbs of Murchison for sale. Please email our sales manager at [email protected] to inquire.

← Asteroid Vesta
Rumuruti Meteorites: Chondrites That Are Anything But Ordinary →