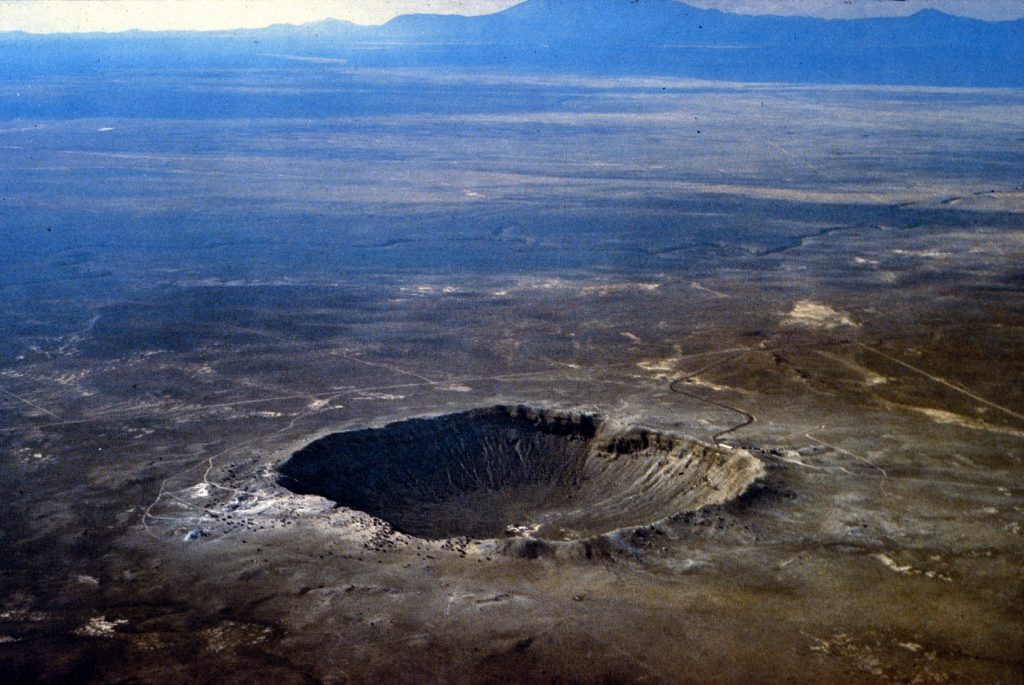 One of the most fascinating aspects of planetary science is the number of geographical features shared by Earth and its sibling planets in our galaxy and beyond. Like our own, other planets have oceans, mountains, valleys, and even craters, which we associate with meteorites. Experts in geography define craters as “bowl-like depressions,” caused by violent collisions between celestial bodies or from volcanic eruptions.

Meteorite impact craters are important to researchers studying how planets and galaxies are formed. For example, they can tell scientists the approximate weight of the impactor and about how fast it was coming in. Craters can also reveal a lot about how old a planetary body is; the Moon, for example, has many “astroblemes”—meaning “star wounds”—across the central part of its farside, which is an indicator that region is older than the Moon’s smoother areas with fewer craters.

Craters also naturally excavate into the body’s crust and can provide scientists with primitive core samples and clues about the planet’s structure. Massive meteorites that hit the surface of Europa (one of Jupiter’s moons), for example, left large craters that punched through enough of the moon’s crust that researchers were able to estimate the depth of its ice shell. Further, data about the diameter and depth of the craters on Europa also clued scientists into the possibility of an ocean or warm ice layer below the ice shell.

As much as craters can tell us about a planet’s past, they are also useful as sites to further our ambitions for the future. The floor of Barringer Crater, also called “Meteor Crater” or the “Canyon Diablo Crater,” served as a training ground for NASA astronauts preparing for the Apollo missions; there, the future moonwalkers learned how to hunt for “faux moon rocks.” These return samples have been indispensable to analysts identifying lunar meteorites and

some researchers even believe a rock sample from the Apollo 14 mission may contain the first evidence of Earth material—a meteorite originating from Earth—on the Moon.

Impressive as craters may be, they too fall victim to weathering by Earth’s climate. The Wabar Craters, for example, lie in a now inaccessible desert region of Saudi Arabia and remain a mystery to the meteorite community for many reasons. First, the crater site is located in a now extremely dangerous area; political events, temperatures that can top 140 degrees Fahrenheit in the summer, and the terrain all contribute to the scarcity of Wabar material. Second, shifting sands have all but obliterated the craters, as the sand has slowly filled them over time. Finally, the material recovered from the Wabar crater site is a blend of both weathered and well-preserved irons. How the two could have been produced by the same source and lie in the same site still puzzles scientists today.

One thing, however, is certain: craters hold the key to understanding what happens when something from an alien world collides with another. Asteroids have destroyed life while also creating new environments for microbes and bacteria. On Earth, some people have made craters their home, like the city of Nördlingen, which was built inside the Nördlinger Ries impact crater in Germany. Looking forward, missions to the Moon and Mars will investigate what secrets their craters hold, which will inform how we explore–and eventually settle–our solar system and beyond.